In 1839 the American physician and naturalist, Samuel George Morton, published his Crania Americana. In this he developed his theory based on comparative measurements in which he initially used mustard seed and ultimately lead shot to determine a racial hierarchical scale based on cranial capacity. In a determinism that equated brain size with intellect, he found that Caucasian skulls were the largest, followed by Asian, Native American and lastly African.

This artwork draws an analogy to the hierarchical understanding of speciation and racialised taxonomies. Three funnels are labeled with three subjects of psychological experiment – pigeon, rat and chimpanzee – and filled with their relative brain weight in seed.
As part of exhibition Suspicious Mind, curated by Nina Liebenberg and Fabian Saptouw. Michaelis Galleries, 2013 and Annex (ISANG) 2014
www.suspiciousmind.co.za 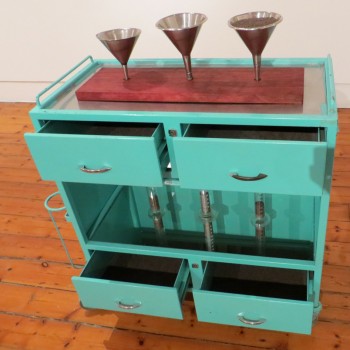